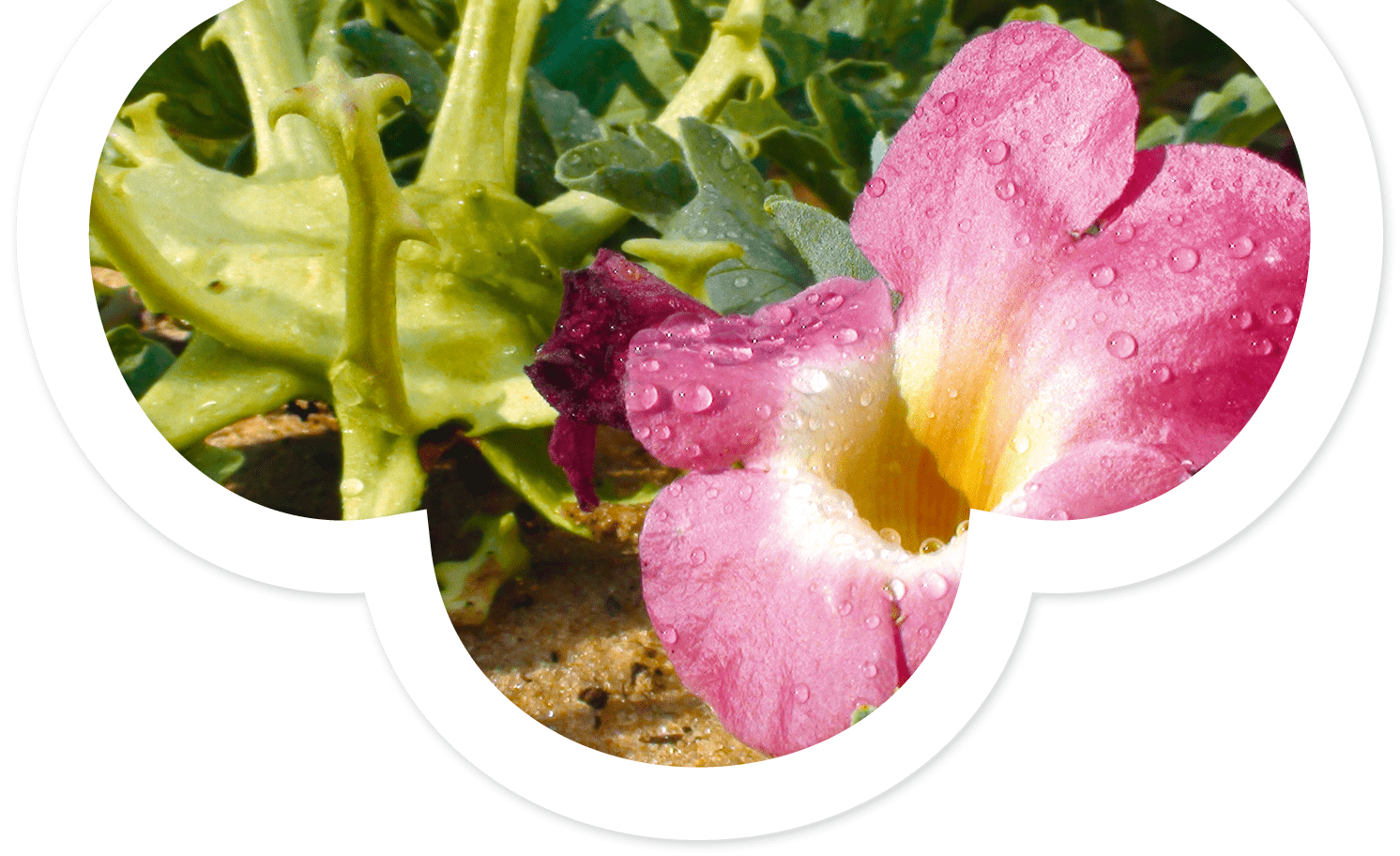 Harpagophytum procumbens is a member of the sesame family (Pedaliaceae). It is commonly called “Devil’s Claw” because its fruit is covered with thorny barbs.

When goats walk on these, they become stuck in their hooves. To get rid of them, the animals caper about and shake their legs in all directions. This “wild dance” led the Bushmen to believe that the goats were under the influence of the devil. These indigenous peoples of Southern Africa, among them the Bantu, have used this herbal remedy since ancient times to relieve rheumatic pain and digestive disorders. The plant was first collected and described by western scientists in 1820 but it was not until 1907 that a German publicised its anti-inflammatory properties.

Harpagophytum is a ground-trailing perennial plant that grows very slowly in the desert. It is mainly found in Namibia.

In herbal medicine, the secondary root tubers are cut into slices and dried before use. Over-harvesting of this extraordinary plant has almost caused it to die out. It is therefore crucial to use it wisely and ensure that its origin is sustainable.

Harpagophytum has no known toxicity and is a very safe plant. Side effects are rare, occurring in only 3% of cases, and tend to be of a gastrointestinal nature (e.g. diarrhoea). It should preferably not be taken at the same time as anticoagulants or during pregnancy.

As a precaution, it should also be avoided in the case of gastric ulcers.

Harpagophytum works at different levels of the inflammatory process. It is capable of inhibiting the synthesis of PGE2 and the production of nitric oxide by suppressing the expression of COX-2 and iNOS (JANG & al., 2003 ; GRANT & al., 2007).

For HUANG & al. (2006), harpagoside prevents NF-KappaB activation, and has no influence on COX-1. In 2001 and 2012 FIEBICH & al., demonstrated the suppression of pro-inflammatory cytokine synthesis as a result of taking Harpagophytum, which explains its usefulness in conditions such as osteoarthritis. Harpagoside inhibits the production of TNF alpha, IL-1 beta, IL-6 and PGE2.

Data from several studies suggests that in addition to blocking the production of inflammatory mediators, Harpagophytum procumbens inhibits the mediators responsible for cartilage destruction, such as metalloproteases, NO and elastase (CHRUBASIK & al., 2006).

A study conducted by WARMOCK & al. in 2007, involving 259 patients with general rheumatic disorders (affecting their hands, wrists, shoulders, hips and knees) who were given Harpagophytum for eight weeks, reveals the importance of this plant in enhancing quality of life and relieving arthritic pain :

In a double-blind study in 2000, CHANTRE & al. compared the efficacy and tolerability of Harpagophytum with that of diacerhein for four months in 122 patients with osteoarthritis of the knee and hip. In both groups, there were similar improvements in pain and mobility. The patients taking Harpagophytum had fewer side effects. The study concluded that Harpagophytum is safer than diacerhein while being equally effective.