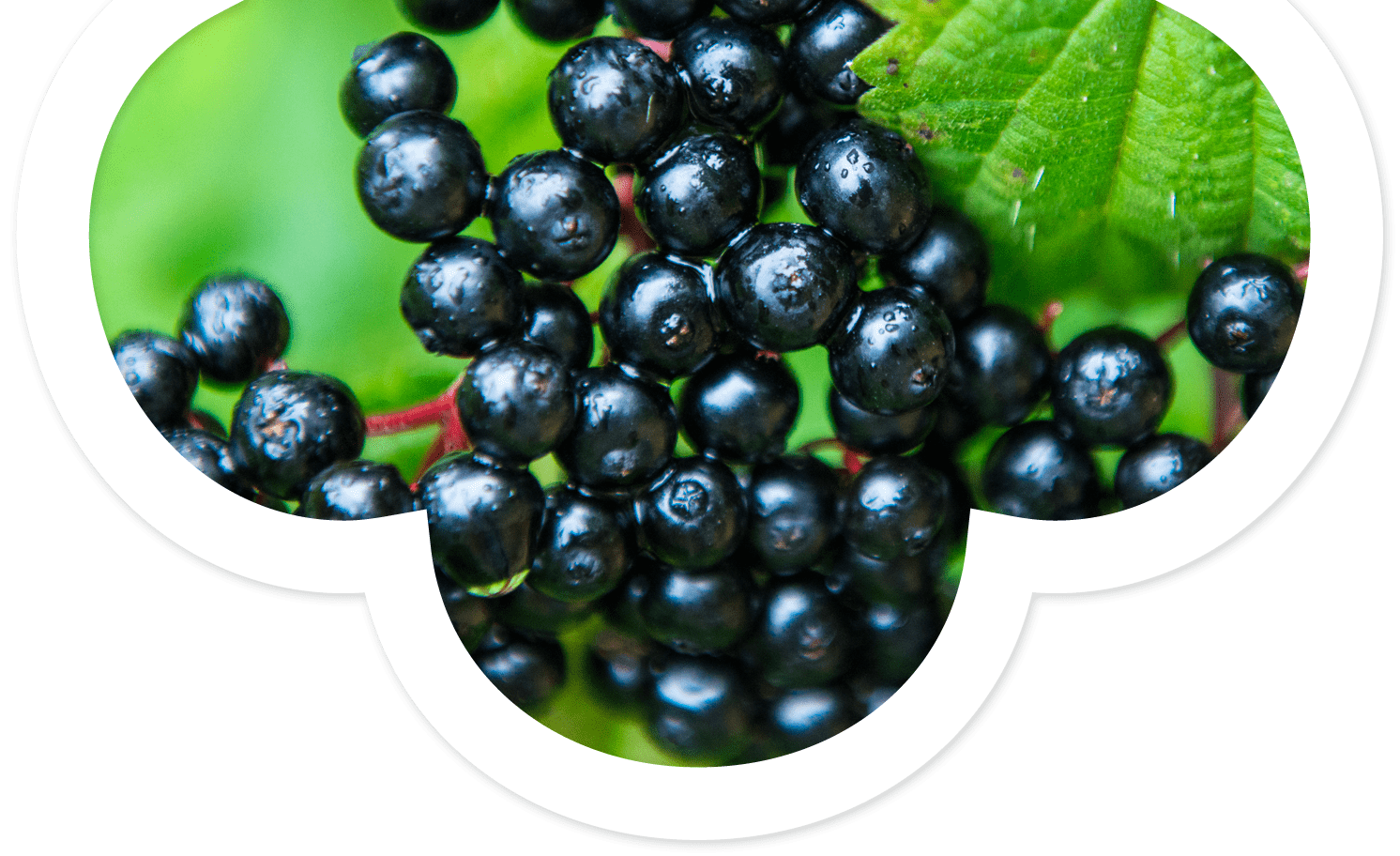 Elderberry (Sambucus nigra), also known as black or European elder, belongs to the Caprifoliaceae family and is a shrub with compound leaves and small black berries full of dark purple juice. It grows in Europe, Central Asia, America and North Africa, and is known to have antimicrobial and antiviral effects.

It also has anti-inflammatory and cholesterol-lowering properties, as well as potent antioxidant activity. The flower heads and fruit are used in herbal medicine.

Elderberry is one of the world’s most popular medicinal plants.

Historical applications include use as a painkiller, anti-inflammatory, diuretic and expectorant. Native Americans used it to treat infections, coughs and skin conditions. When mixed with other ingredients, it has been used as a gargle for coughs, head colds, laryngitis, influenza-like symptoms and shortness of breath(ULBRICHT & al., 2014).

It contains mucilages and tannins, flavonoids, phenolic acids (mainly caffeic and chlorogenic), triterpenic acids (ursolic and oleanolic), vitamins (B2, B6 and C) and minerals (especially potassium).

Commission E (the scientific advisory board of the German Federal Institute for Drugs and Medical Devices) now acknowledges the benefits of elderflowers for the treatment of colds.

A meta-analysis that included 180 participants showed that elderberry supplements reduce the duration and severity of respiratory symptoms in patients with a cold or flu-like infection (HAWKINS & al., 2019).

In a double-blind study in patients with flu-like symptoms such as fatigue, headache, sore throat, cough and general aches and pains, 60 individuals were given 15 ml of elderberry syrup four times a day for five days. The symptoms of the group taking elderberry were relieved on average four days quicker compared with placebo. Furthermore, use of rescue medication was significantly less in those receiving elderberry extract (ZAKAY-RONES & al., 2004).

In 2011 Krawitz & al demonstrated that a standardised elderberry liquid extract was effective against respiratory bacterial pathogens and influenza A and B viruses.

In 1994 Neubauer & Marz conducted a randomised, double-blind, placebo-controlled trial involving 160 individuals with the aim of examining the effects of an elderberry preparation on acute bacterial sinusitis. They studied both radiographic findings and symptoms in both groups. In this trial, following treatment, 64.1% of patients in the treatment group showed no radiographic abnormalities compared with just 36.4% in the placebo group, and the percentage of asymptomatic participants was 60.3% in the treatment group and 25% in the placebo group. With respect to clinical symptoms, a significant difference between the two groups was seen for mucous discharge, nasal congestion and headaches. The authors therefore concluded that elderberry improves conventional treatment of acute bacterial sinusitis(ULBRICHT & al., 2014).

Elderberry contains lectins and highly specific ribosome-inactivating proteins with the potential to target specific cells. SNA-IV and SNA-V are found in the fruit of the plant. These SNAs (S. nigra agglutinins) bind to molecules used by pathogens in the pathogenic infective process, resulting in competitive inhibition. The molecules targeted by elderberry lectins are the same as those used by Helicobacter pylori, Escherichia Coli, Streptococcus pneumoniae, Plasmodium falciparum and Haemophilus influenza (RANDALL & al., 2017).

Some flavonoids in elderberry have been shown in vitro to bind to influenza virions of at least one strain (H1N1), inhibiting host cell entry or recognition and rendering the virus inert. In addition, the lectins present in the fruit prevent virus haemagglutinin binding to the sialic acids required for host cell entry by endocytosis. They also prevent, in vitro, haemagglutination caused by these viruses in the host (RANDALL & al., 2017).

In a 2008 study, Waknine-Grinberg & al demonstrated that, in addition to stimulating pro-inflammatory cytokine production, elderberry causes a shift in the immune response to Th1 responses, conferring immunomodulatory activity. This has proved beneficial in the treatment of leishmaniasis, as a Th1-type response is required to eliminate the parasites responsible for this disease. In mice infected with leishmaniasis and treated with a speciality product containing elderberry, the development of lesions was delayed compared with the control group.

The European Food Safety Authority (EFSA) has acknowledged the antioxidant potential of these berries (EFSA, 2010).

In 2009 Ciocoiu & al. studied the effects of elderberry on diabetic rats. They observed a decrease in malondialdehyde concentration and an increase in glutathione peroxidase and superoxide dismutase levels, significantly lowering the risk of lipid peroxidation. They also noted glucose- and lipid-lowering effects.