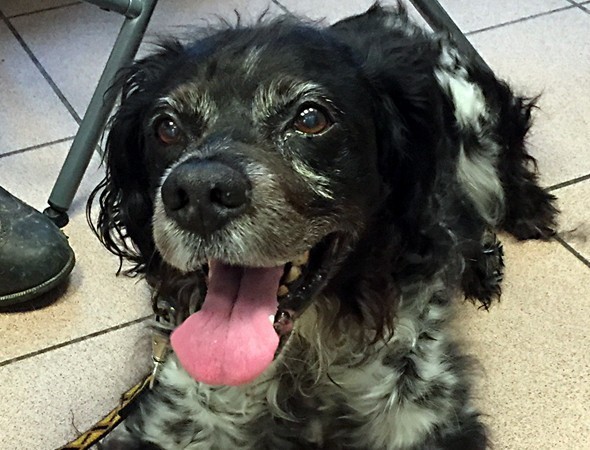 This is Abby, a castrated Brittany aged 14 years and 2 months and weighing 12.5 kg, who has stage C dilated cardiomyopathy (DCM). His existing treatment was Benazepril (ACEI: angiotensin-converting enzyme inhibitor) in a single dose of 0.4 mg/kg/d, in addition to one Anti-Ageing TM tablet every morning since he suffered a stroke. About ten days after having his stroke and starting on Anti-Ageing TM, there was a marked improvement and some four weeks later he’d completely recovered from the stroke without any after-effects. He then began to get increasingly breathless and developed a cough. A cardiopulmonary examination revealed pulmonary oedema and also that his DCM had worsened since the previous check-up eight months earlier. I therefore supplemented his treatment with 2mg/kg/d Furosemide, administered in two daily doses, and one Cardio Supp TM tablet a day in the morning. As agreed, Abby’s owner called me ten days after the start of the new treatment and reported that Abby was beginning to feel much better and was much less tired than previously. A month later, during his clinical check-up, Abby was very lively and even tried to jump up onto the consultation table. Cardio Supp TM was always my second-line treatment for patients with cardiac problems, but I’ve been using it as the first-line treatment since Abby.