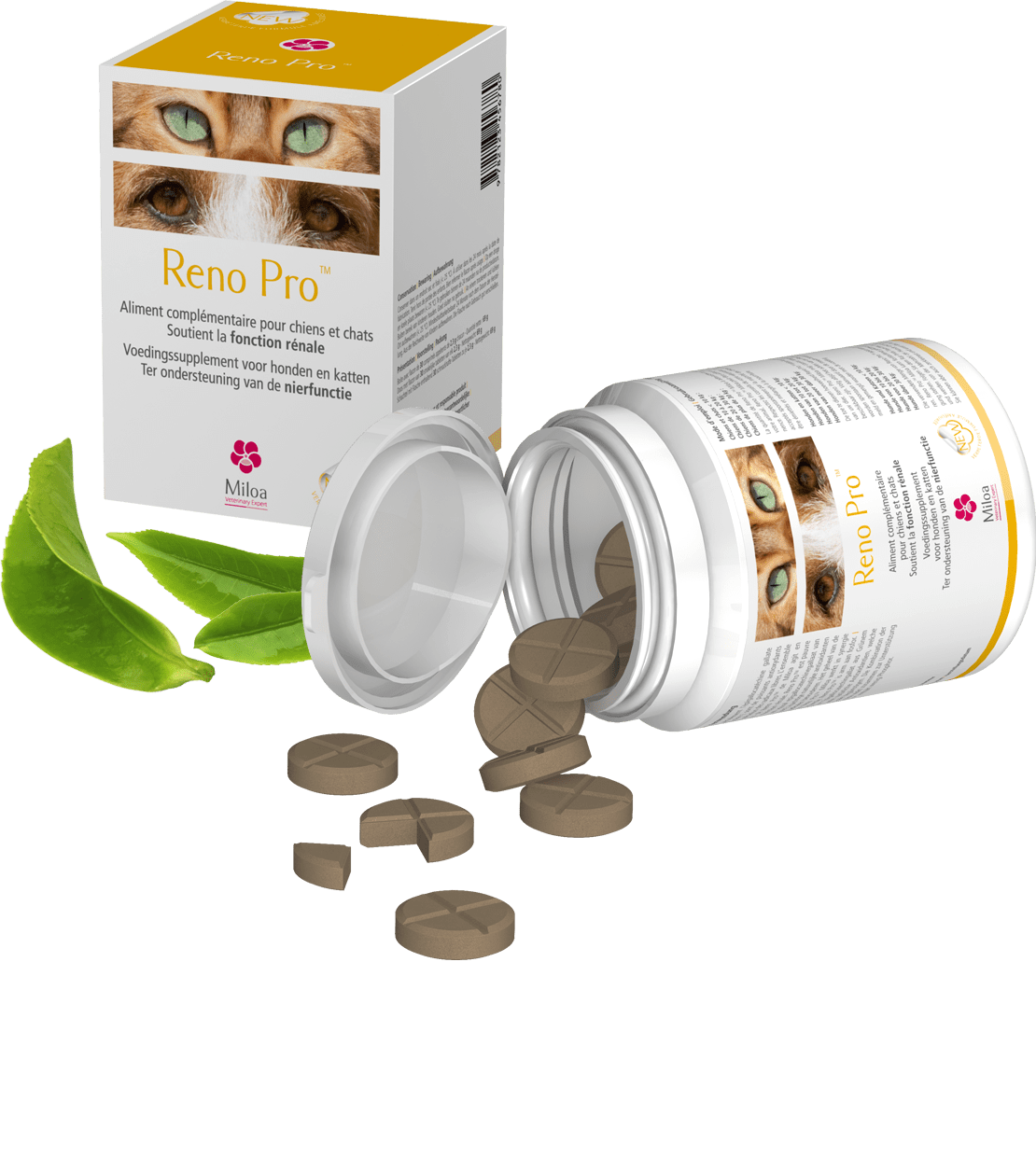 The kidneys produce urine. They operate like a biological treatment plant, cleaning the blood, eliminating waste and retaining important nutrients such as water, proteins, amino acids and carbohydrates.

They also synthesise hormones: erythropoietin, which stimulates the production of red blood cells; calcitriol, an active form of vitamin D; and renin, which plays a role in blood pressure. The kidneys maintain the hydro-electrolytic balance.

All the nutritional components of Miloa Reno Pro TM work together to support renal function. Reno Pro TM is low in phosphorus.

Follow your vet’s advice. The tablets are extremely palatable. Most cats and dogs will swallow them without fuss, but they can also be crushed and mixed with food.

Keep in a cool, dry place (< 25 °C). Use within 24 months of the date of manufacture. Keep out of reach of children. Close securely after use.

They are using Reno Pro tm 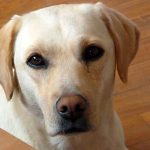 Reno Pro tm
Delta, a 10-year-old spayed Labrador, had an incidental finding of an atrophic kidney when she came to us for a routine consultation in January 2018. The dog had been monitored with regular blood tests, which had not shown up any abnormalities until then (urea and creatinine levels were normal). After an ultrasound scan indicated the kidney problem, a urine analysis was carried out but revealed no abnormalities. Her SDMA (a biomarker for early detection of kidney disease) was high, however, which prompted her owner to agree to start her on renal support treatment with Miloa’s Reno Pro TM (one tablet a day). Since then, Delta has been doing well and has increased her daily water intake (which was low before the treatment began). Good product palatability. 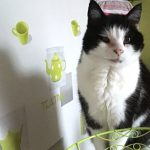 Reno Pro tm
Zoe was taken for a consultation in February 2018 because she drank and urinated a lot. Zoe is a sterilized European cat, born in August 2003. A blood test showed that she suffered from kidney failure. Urea and creatinine were increased (urea: 0.9 g/l, max = 0.6 g/l and creatinine 14.8 mg/l, max = 14 mg/l). Since then, Zoe has been on Reno Pro TM at half a tablet a day. Zoe has been taking her treatment easily since that date and is doing well. She still has a good appetite despite her advanced age and kidney problems." 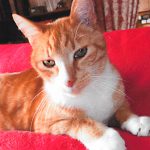 Reno Pro tm
My Cooky cat is a European male cat. A few months ago, seen as he was out of shape, we took him to the vet who took a blood sample. He actually has kidney failure and pancreatitis. Thanks to the use of Reno Pro TM, the progression of his disease has slowed. 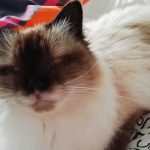 Reno Pro tm
Ganesh is a 8 Year old, castrated male Burmese cat. He started vomiting when he was 3 or 4 years old. Despite visits to various veterinarians, there was never any concern about these constant vomiting episodes. I didn’t notice any other worrying signs. During his annual visit at 7, the veterinarian decides to check his urea rate, as the Burmese cats are predisposed to kidney problems. The results of the blood test showed that her urea levels are indeed high. She decided to give her Reno Pro TM, ½ tab per day. After a month, her urea rate dropped. We continue the treatment and, a few months later, Ganesh no longer vomits! What a relief for him (and for us: less housekeeping!)