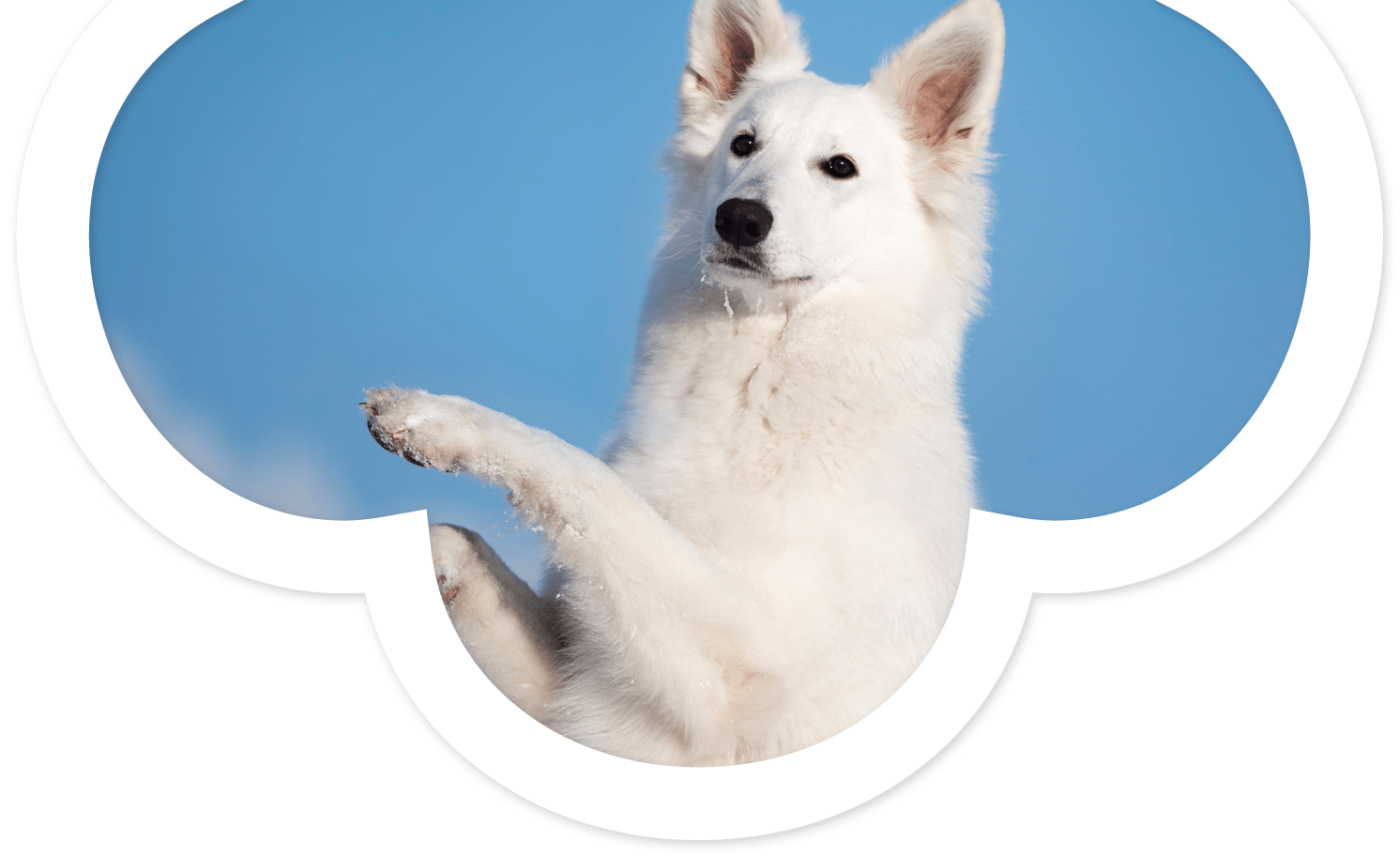 Hypersensitivity-hyperactivity syndrome (HS-HA) in dogs is often compared to attention-deficit hyperactivity disorder (ADHD) in children. It is a behavioural disorder associated with a lack of inhibition.

Affected dogs are hypersensitive, reacting to even the slightest stimulus: a passing fly, someone crossing their leg, a sneeze, etc. Dogs with HS-HA are hyperactive, i.e. constantly moving and hyperkinetic, their owners often describing them as clumsy, rough, tireless or unmanageable. They behave like three-month-old puppies, as they have not learned the « rules of good behaviour ».

To use a human comparison, imagine a four-year-old child who greets you by jumping into your arms, shouting your name and smothering you with kisses. It’s very cute. Now imagine an adult behaving the same way. It would be much less welcome.

In human society, certain behaviour is accepted in young people, but not tolerated in adults. It’s exactly the same with dogs. They need to learn to inhibit their behaviour and control themselves as they get older, which they don’t do if they have HS-HA. This is why we talk about lack of self-control or inhibition. It is a developmental disorder. Affected dogs don’t lose their inhibition, because they never acquired it in the first place.

Identified causes include inexperienced mother, large litter size and early weaning. Normally, the mother teaches her pups bite inhibition by controlling their play. If she can’t do this, for instance if she is physically separated from her pups before they’re eight weeks old, if she isn’t inclined to because she is too young or has HS-HA herself, or if she doesn’t have time to do it because the litter is too large, the puppies will not learn self-control and are at risk of developing HS-HA.

Reasons for seeking veterinary advice can vary. Vets are often faced with exhausted owners at the end of their tether, coming to ask for help. Sometimes the owners are not aware of the pathological nature of their dog’s behaviour. They say that their dog still thinks it’s a puppy or this breed is always « crazy ». For vets, this situation is more difficult because they have to dispel the owners’ misconception of their dog before they can consider behavioural therapy.

Note that not all « crazy » dogs have HS-HA. The diagnosis is only made if their behaviour makes it impossible for them to have normal social interactions and live harmoniously with their human family and with other dogs.

Dogs with HS-HA are « explosively » destructive, like a tornado sweeping through the room. They get bored easily and what could be more fun than chewing something? Oral exploration is normal for puppies but they soon understand that they have to stop gnawing the feet of the sofa when their owner punishes them – unless they have HS-HA.

Affected dogs are sometimes not well house-trained, often because they haven’t learned properly, but not always. Absorbed in play, they think they have better things to do than go outside to do their business and it can wait – like a young child caught up in a game « forgets » to use the potty until sometimes it’s too late. The dogs don’t have time to find a suitable spot or whine to be let out and they relieve themselves indoors.

They also have a lot of trouble learning new things, yet ironically these dogs have above-average intelligence. Their brains are constantly in overdrive, creating more synaptic connections than in other dogs. Unfortunately, they are incapable of concentrating. They obey if someone raises their voice to get their attention, but they don’t retain the command. If a butterfly flutters by, a dog with HS-HA will follow it.

HS-HA dogs constantly seek interaction. They always want games, cuddles or action. They have a constant need for contact: oral (licking or mouthing at objects); physical (nudging their owner’s hand); aural (whining for attention). If their owner ignores them, they soon become more demonstrative, biting, jumping onto his or her lap or barking loudly. They need to be the centre of attention at all times. Dogs with HS-HA repeatedly nip their owner and have no bite inhibition because they haven’t learned to « keep their teeth for their food ». They play rough and like biting.

They are also unable to communicate with other dogs, acting aggressively and demanding interaction. Other dogs often lose patience and attack them. Dogs with this disorder love to play, but are not able to complete a play task, such as fetching a stick. They run after it but don’t bring it back. Tug-of-war games should be avoided at all costs, because they reinforce over-excitement and biting behaviour.

This list is not exhaustive. Sometimes the clinical symptoms are not straightforward and some dogs may display a combination of behavioural problems, including anxiety. As these dogs are incapable of forming a healthy relationship with their owner or other dogs, they are often punished or else ill-treated by their exasperated peers. HS-HA dogs don’t understand why they are being given a rough time and develop general anxiety, which exacerbates their hypervigilance. Poor or dysfunctional dog/owner relationships are another common problem of HS-HA. In fact, many owners give up when faced with dogs that don’t learn, and end up letting them do whatever they want.

When dogs with HS-HA are brought to the vet’s, they tend to show the same behaviours.

You can spot them straight away in the waiting room, as they never sit still and always want to play with other dogs. They often knock things over and generally wreak havoc. They chew their lead when their owner manages to get them to lie down. They explore the room from top to bottom, showing excessive exploratory behaviour. They stick their noses everywhere, even into the rubbish bin. They stand on their hind legs, stretching up to explore the counter or the worktop in the exam room. Once the vet has seen them, they start all over again. They are constantly on the move hyperactivity. When they finally lie down, the slightest noise has them on their feet and it all begins again hypersensitivity. When they walk past you, they either jump up at you or grab your hand in their mouth. This indicates their need for oral contact and the persistence of biting beyond the age of four months.

Behavioural therapy with an animal behaviourist should be initiated as soon as possible. Zen Supp TM (1 tablet per 5 kg bodyweight) has a calming, settling effect on dogs with this disorder. Medication may be required.