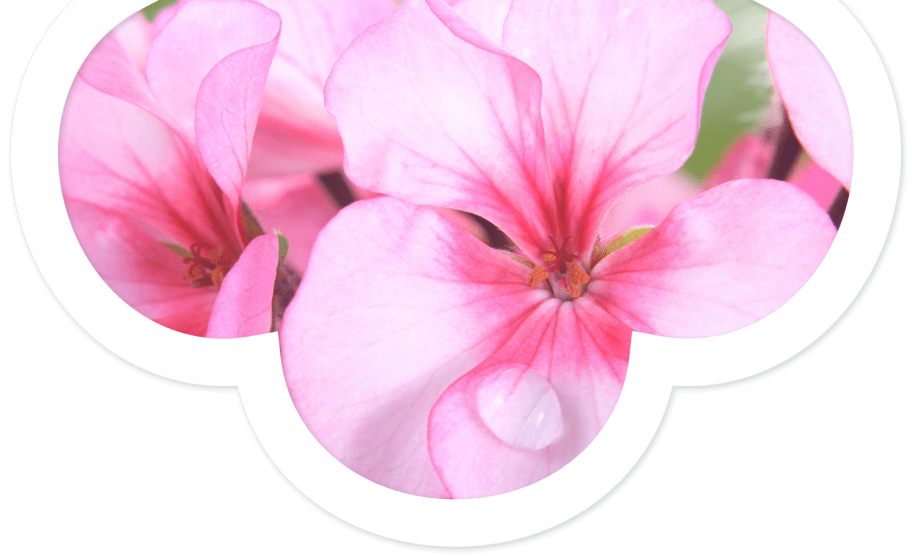 Pélargonium graveolens (P.G.) or geranium rosat is part of the Geraniaceae family. It is a shrub that can reach over 1 meter in height. It is native to South Africa like 71% of the wild pelargoniums listed. We must distinguish between geraniums and pelargoniums. Geraniums are often herbaceous plants distributed in temperate regions and the northern hemisphere. Their flowers are regular and all the petals have a similar shape and size while those of pelargoniums are irregular: 2 upper ones which differ from the 3 lower ones. Pelargoniums appreciate coastal slopes exposed to the sun and a Mediterranean-type climate and do not tolerate frost unlike geraniums. They are the delight of gardening enthusiasts, there are no less than 16,000 different cultivated varieties. P.G. has been hybridized and there are many cultivars (Egypt, Reunion Island, China) whose composition and therefore their virtues differ.

Pelargoniums are edible: the lobed leaves and velvety to the touch deliciously perfume cakes, teas, rums. The essential oil is extracted from the very fine hairs found on the leaves. It has a scent of mint and rose which varies according to the flowering. These are the terpenes that give P.G. its rose scent (citronellol, geraniol, linalool, nerol), 300 to 400 kg of leaves give only 0.5 l of essential oil.

A 2014 study showed that a combination of essential oils containing P.G. reduced inflammatory symptoms such as itching, erythema and edema associated with acute otitis externa in humans (PANARI & al, 2014). When applied to the skin, essential oil of P.G. inhibits the accumulation of neutrophils, thereby reducing inflammation (MARUYAMA & al., 2005). It inhibits the adhesion of neutrophils mediated by TNF-α in vitro, at a concentration as low as 0.0125% (SHIGERU & al., 2003 ; BOUKHATEM & al., 2013).

A 2014 study showed that when coupled with other essential oils, it is as effective as ciprofloxacin 0.3% in the treatment of acute otitis externa in humans (PANARI & al., 2014).

P.G. essential oil works in synergy with antibiotics to reduce the effective dose (SIENKIEWICZ & al., 2014). Geraniol is anti-elastase, anti-keratinase and antimicrobial which makes it very interesting in the management of skin wounds.

It is less cytotoxic than essential oils of lavender or cinnamon (SIENKIEWICZ & al., 2014).

Geraniol has anti-fungal effects, especially against Aspergillus Flavus and Candida Albicans. This effect is due to the release of potassium from the cell, increasing the fluidity of the membrane of C. Albicans (PANARI & al., 2014). P.G. essential oil has also shown an effect against T. mentagrophytes (DORAN & al., 2009).

Now you know all about the king of our balconies!