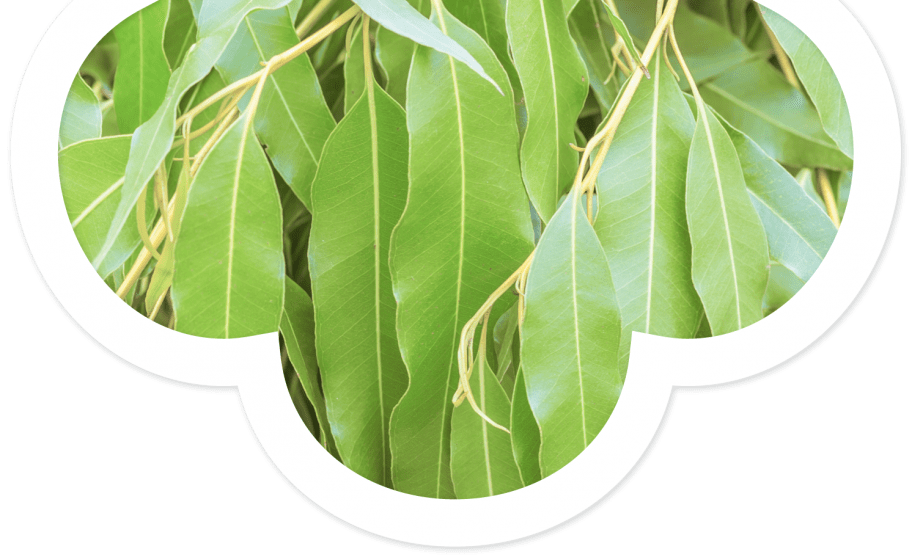 Eucalyptus trees are native to Australia. There are over 600 different species with varying chemical compositions. Very resistant and easily adapting to different environments, they have been introduced to the subtropics of Asia and the Mediterranean basin. They are part of the Myrtaceae family. Their wood is of high quality and they dry out the soil, thus promoting the fight against malaria. They were discovered in the 18th century in Tasmania.

The best-known species, Eucalyptus Globulus, has been nicknamed "fever tree" by the Aborigines, who have used it to fight fever and infections for millennia. Massive commercial production of Eucalyptus essential oil began in the mid-19th century in Australia.

Mainly the leaves are used in aromatherapy for their many health benefits. They contain different molecules including 1,8-Cineole or cineole (also called eucalyptol), tannins, flavonoids and resin. Eucalyptus Globulus mainly contains eucalyptol and very little α-terpineol, it is more irritant than Eucalyptus Radiata which contains more α-terpineol, terpinene-1-ol-4 and linalool.

Eucalyptus Globulus and Radiata have very interesting characteristics in the treatment of respiratory ailments. They demonstrate antiseptic, expectorant and decongestant properties of the respiratory tract. In addition, they stimulate the mucin glands of the bronchial and digestive epithelium (FRANCHOMME & al., 1990). They also have antitussive and mucolytic properties (BOUKHATEM & al., 2017).

1,8-cineole reduces the rate of exacerbation in patients with chronic obstructive pulmonary disease through its mucolytic, bronchodilator and anti-inflammatory effects (WORTH & al., 2009). In a multicenter study of 247 patients who received 200 mg of cineole or a placebo for 6 months, it improved respiratory function in patients with asthma (WORTH & DETHLEFSEN, 2012).

It has recently been shown that cineole can bind efficiently to COVID-19 proteinase via hydrophobic interactions, hydrogen bonds and ionic interactions. The authors of this study therefore hypothesized that cineole is a potential inhibitor of Corona virus infection COVID 19. However, more research is needed to investigate its potential medical use (SHARMA & KAUR, 2020).

In patients with bronchial asthma and in healthy patients, the cineole contained in eucalyptus administered at a dose of 200 mg 3 times a day inhibits the production of the pro-inflammatory mediators leukotrienes B4 and prostaglandins E2 produced by cultured monocytes ex vivo (JUERGENS & al., 1998). These are mainly the anti-inflammatory effects of Eucalyptus Globulus which are reported in the scientific literature. It shows analgesic and anti-inflammatory effects in mice and rats. Indeed, it reduces the inflammation of the rat paw induced by carrageenan and dextran. It exhibits central and peripheral analgesic effects (SILVA & al., 2003) associated with inhibition of nitrogen oxide production and anti-free radical effects in murine macrophages cultured in vitro (VIGO & al., 2004). ). It also shows immunomodulatory effects. In particular, it stimulates phagocytosis in a dose-dependent manner on human macrophages in vitro (SERAFINO & al., 2008). Cineole inhibits the production of pro-inflammatory cytokines such as tumor necrosis factor-α and interleukin-1β produced by lymphocytes and monocytes stimulated by lipopolysaccharide in vitro (JUERGENS & al., 2004).

In addition, in chickens vaccinated against Newcastle disease and avian influenza, a mixture of peppermint and eucalyptus oil (MENTOFIN®) stimulates innate immunity and the humoral response (AWAAD & al., 2010).

Eucalyptus Globulus a potent antioxidant effect which was assessed by the DPPH Free Radical Test, Trolox Equivalent Antioxidant Capacity Test (TEAC), Hemoglobin Ascorbate Peroxidase Activity Inhibition Test (HAPX) and that of the inhibition of lipid peroxidation. This antioxidant activity appears to be related to the concentration of flavonoids in Eucalyptus Globulus (DEZSI & al., 2015).