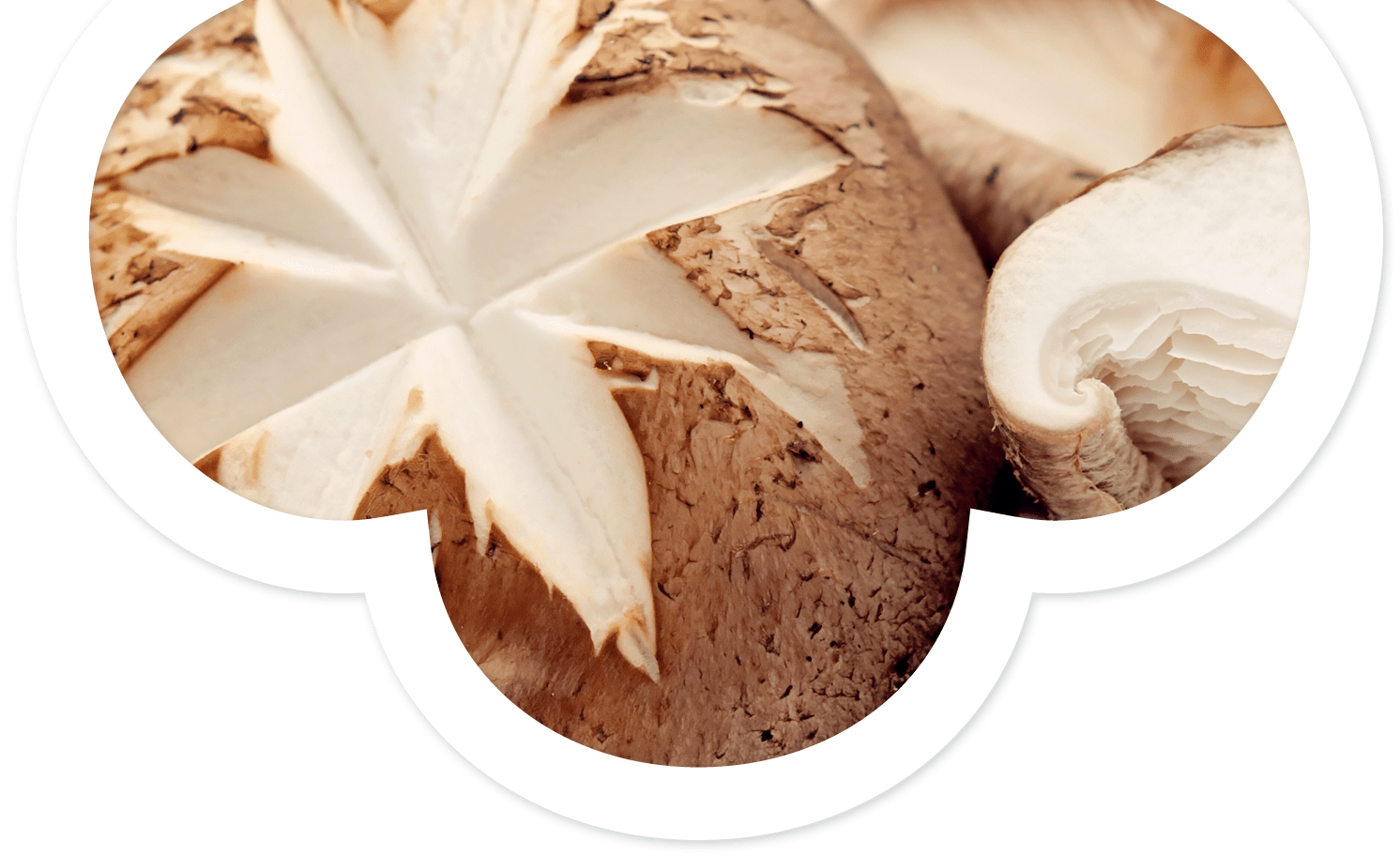 THE ELIXIR OF LIFE!

Also known as Lentinus edodes, or black mushroom, fragrant mushroom or even oak wood mushroom. It’s a kind of basidiomycete fungus from the Marasmiaceae family.

It has been grown in China and Japan for over 1,000 years, and has been used in Chinese medicine for even longer! It is the second most cultivated fungus in the world for its culinary qualities as well as its medicinal properties, which are quite varied.

Shiitake is an important source of several vitamins and minerals. It is, in fact, very rich in copper, selenium, vitamin B5 and D. It also contains a lot of potassium, manganese, zinc, phosphorus, magnesium, vitamins B2, B3 and B6 and finally folates. Concentrations of these minerals are higher when the fungus is presented in dried form.

It is also rich in proteins (and amino acids such as lysine and leucine), fatty acids (linoleic acid, oleic acid, palmitic acid), and fibre, more than 90% of which are not soluble, which contributes to good intestinal function. It must be consumed cooked, which will limit the risk of an allergic reaction of lentinan. In dried form, it is advisable, for gustatory reasons, to soak it for a short hour before cooking.

Most of its virtues are associated with a polysaccharide: lentinan (beta 1,3 D-glucan).

It stimulates the activity of macrophages, T lymphocytes and NK (DER MARDEROSIAN & al, 2001) and the synthesis of IL-1 alpha, IL-beta, TNF alpha and interferons (PETRAVIC-TOMINAC & al, 2010).

It’s anti-genotoxic and antimutagenic. Shiitake has been used in chemotherapy programs in Japan for many decades. In women with breast cancer, it inhibits tumour growth and induces cellular apoptosis (XU & al, 2017).

A 12-year meta-analysis of more than 3,000 lung cancer patients found that those treated with chemotherapy with lentinan respond favourably to treatment in 56.9% of cases versus 43.3% without lentinan! (YIRAN & al, 2018).

Finally, Shengming & Guoxi in 2018 proved that lentinan inhibits tumour angiogenesis by acting on the expression of interferons by T lymphocytes and thus the growth of colon and lung cancer.

The antioxidant activity of shiitake is related to its phenolic compounds. Lentinan improves cell tolerance to oxidative damage, resistance to stress, and has a protective and restorative effect on damaged cells (YUSHA & al, 2018). It traps hydroxide radicals and stimulates SOD. It also chelates metals (including Iron). It’s an anti-ageing fungus!

The antibacterial activity of lentinans, which stimulates the phagocytosis of macrophages and neutrophils, including against Salmonella enteritis, Listeria monocytogenes or Staphylococcus aureus (GIAVASIS & al, 2013) and against E. Coli in the intestines of piglets (VAN NEVEL & al, 2003) and Proteus. Shiitake also has antifungal activity against Candida albicans.

Shiitake also has interesting antiviral activity against HIV, West Nile virus and bovine herpesvirus type 1 (HATVANI & al, 2001 ; NGAI & al, 2003). For HIV, lentinan increases the host’s resistance to the virus and reduces the toxicity of the treatment. These capabilities are due to increased gamma interferon synthesis and increased concentration of circulating monocytes (LINDEQUIST & al, 2005).

It is a prebiotic. It is hypoglycaemic, by decreasing the absorption of glucose at the intestinal level.

Finally, thanks to its polyphenols, it is hepato-protective and decreases liver enzymes.

It reduces hyperlipemia by interrupting the enterohepatic cycle of biliary acids. In both humans and rats, it has also been shown to be hypocholesterolemic because it acts both HDL and LDL (LAKHANPAL & al, 2005). It reduces the risk of atheroma plaque.