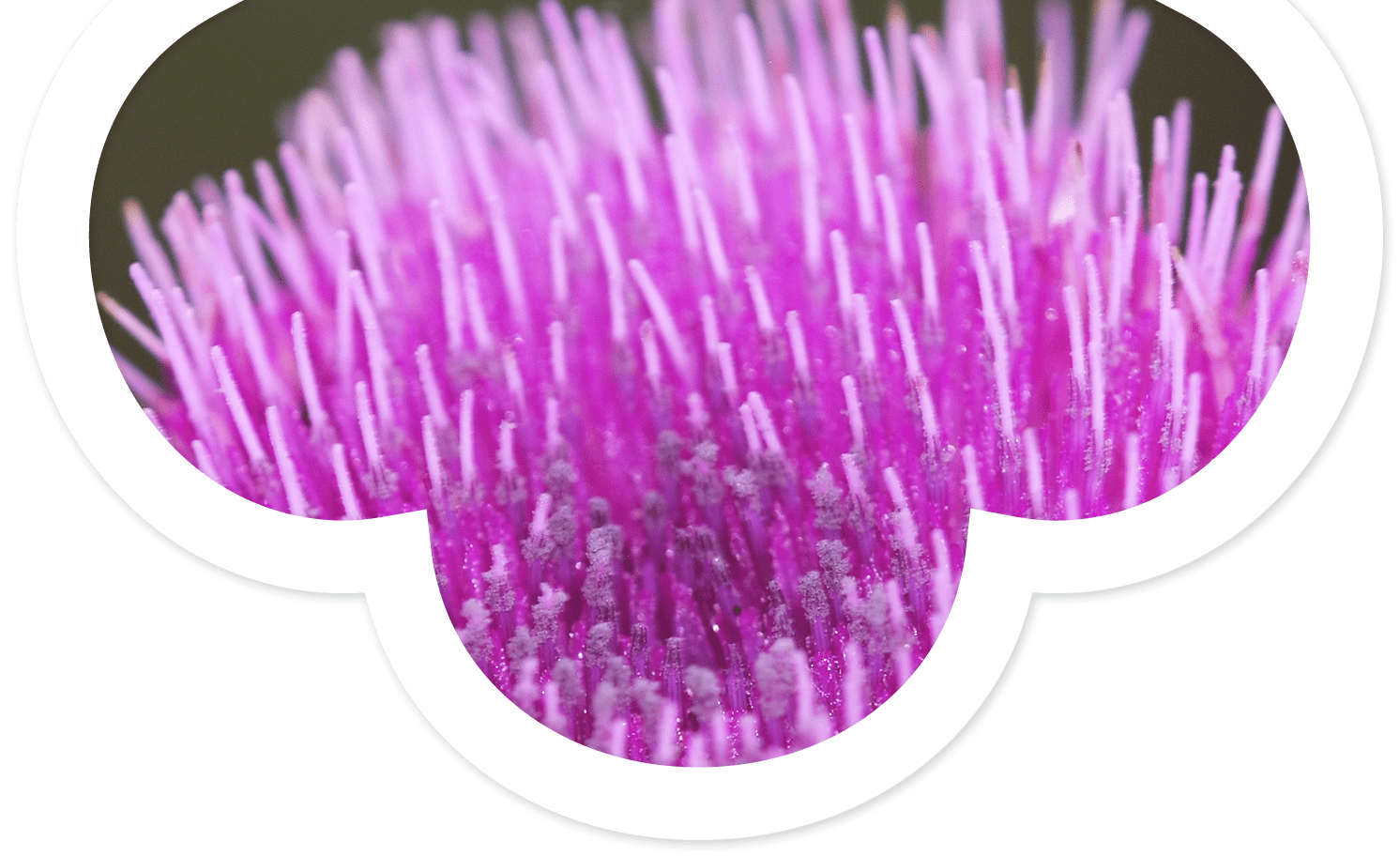 The milk thistle is part of the Asteraceae family. Very present in the Mediterranean basin, both the fruit and the upper parts are used.

Its virtues are numerous and varied: antioxidant, hepato-protective, anti-fibrotic, hypoglycaemic, hypocholesterolaemiant, and anti-cancerous in particular.

These characteristics are due in large part to its active ingredient: silymarin (1,5 to 3 % of the plant), which is a flavonolignan whose main compounds are silybin, silychristin, and silydianin.

It’s a membrane stabilizer. It inhibits the membrane transport systems of hepatocytes, making it more difficult to absorb toxicants. It prevents the peroxidation of lipids and increases the capture of free radicals produced by hepatotoxic substances. It helps maintain the glutathione pool responsible for liver detoxification. It reduces the increase in transaminases and alkaline phosphatases. It protects the liver from oxidative stress.

It stimulates the activity of polymerase α. Therefore, it increases the synthesis of ribosomal nucleic acids and the number of ribosomes in hepatocytes. This increases enzyme biosynthesis, protein synthesis and stimulates liver regeneration (ASGHAR & al, 2008).

By its antioxidant and regenerative action of hepatocytes, it protects the liver from many toxicants, from the side effects of certain drugs or from poison such as: ethanol, paracetamol, cyclosporine, erythromycin and Amanita phalloides (deadly fungus).

It chelates iron which may be the source of the production of toxic free radicals.

Its anti-fibrotic activity is explained by a decrease in the pro-fibrogenic activities of liver stellate cells (which synthesize collagen 1) (TRAPPOLIERE & al, 2009) and by inhibition of MMP and TGF β1 . This helps decrease fibrosis and slows cirrhosis (CHEN & al, 2012).

Silymarin improves the synthesis of bile salts and their excretion by the gallbladder. It is therefore choleretic and cholagogue (CROCENZI & al, 2006).

It protects the stomach from ulcers because it increases mucin secretion, by the elevation of PGE2 and the decrease of leukotrienes (ALARCON DE L’ASTRAL & al, 1992 et 1995).

It reduces oxidative stressors such as malondialdehyde (MDA) by 45%, stimulates the release of NRF2, which increases glutathione synthesis by 65% and reduces TNF α production by 47% (AGHAZADEH & al, 2011).

It may even be immunomodulating according to (NAFISEH & al, 2017), its effects increasing with concentration.

During chronic pathologies oxidative stress amplifies the adverse effects of fibrosis and inflammation related to cellular necrosis that causes protein and DNA damage.

Silymarin is anti-angiogenic and anti-proliferative. It causes the cell cycle to stop and restores apoptosis (ZHENG & al, 2011), (ARGAWAL & al, 2013).

It inhibits the production of MMPs whose exaggerated expression is associated with carcinomas. It also inhibits VEGF (Vascular endothelium growth factor) (KIM & al, 2009).

It thus inhibits the proliferation of tumour cells in many cancers (prostate, lung, breast, ovarian and bladder).

Administering silymarin during 10 days before calving and the following 15 days does not change the milk composition, but increases the quantity and speed of production, while slowing weight loss (TEDESCO & al, 2004).

If you want to spike up your life you know what you need to do!