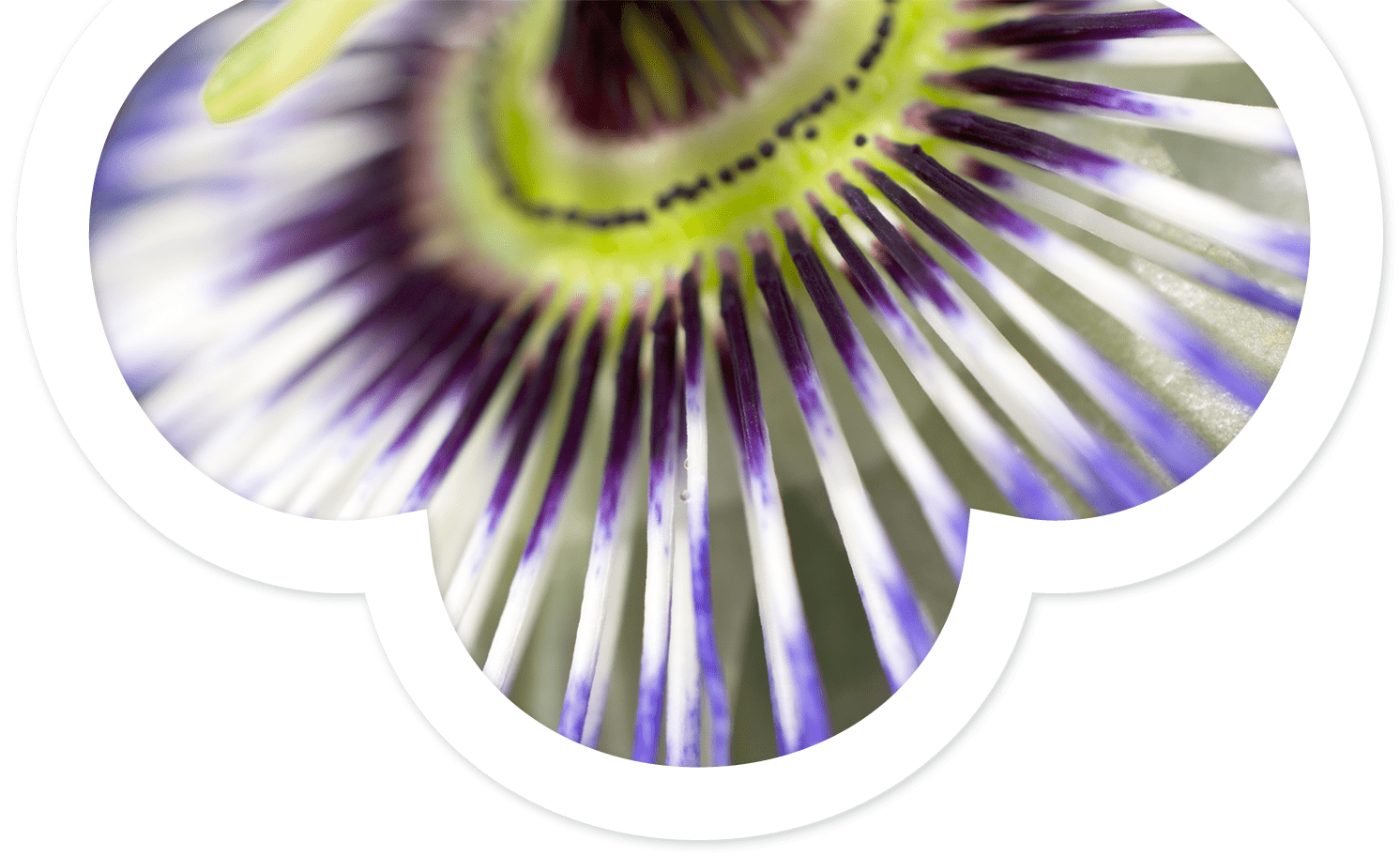 Passiflora incarnata (purple passionflower or maypop) is a member of the Passifloraceae family. It is a climbing vine native to North and South America.

The passionflower gets its name from the fact that each part of the plant recalls the Passion of Christ: the tendrils recall the whip, the three-pointed flowers recall the spear, and the three styles (pistil stalks) recall the nails.

It has been used for years to treat insomnia, anxiety, epilepsy, and asthma and the symptoms of tobacco and opioid withdrawal. The dried aerial parts are used.

Harmin is a powerful monoamine oxidase inhibitor. Apigenin is a competitive ligand for CNS benzodiazepine receptors.

According to DHAWAN & al in 2001, the leaves, flower, and entire plant have anxiolytic properties.

Several studies show the anxiolytic activity of the passionflower due to its GABAergic effect. The effect on mice placed in a maze and receiving 375 mg of extract per kg live weight was comparable to that of diazepam (GRUNDMANN & al, 2018). For APPEL & al in 2011, the various effects of the passionflower are due to its modulation of the GABA system, its affinity for GABA A and B receptors, and inhibition of GABA recapture.

In a study of forty patients scheduled for dental extractions, the patients were given either midazolam or passionflower 30 minutes before the surgery. They were asked to fill in a questionnaire and their oxygen saturation values, heart rates, and blood pressures were measured during the surgery. Result: There were no significant differences between the two protocols for any of the recorded results. Passionflower had an anxiolytic effect similar to that of midazolam (DANTAS & al, 2017).

Epilepsy and depression are linked in humans and mice alike. A depressed state is often observed after epileptic seizures. A major drawback of antidepressor drugs is that they can lower the epileptic seizure trigger threshold and anti-epileptic drugs, such as Diazepam, can cause depression. Allopathy (substitutive therapy) does not provide a solution to this dilemma. Hence the advantage of turning to phytotherapy and Passiflora incarnata, which has calming effects on the central nervous system due to its flavonoids (chrysin) and acts like a benzodiazepine agonist.

What is more, Passiflora incarana increases the GABA concentration in the hippocampal neurons and, thanks to its alcaloids (harmal), is an antidepressor due to monoamine oxidase inhibition. All these mechanisms of action make it possible to mitigate depressive episodes without lowering the epileptic trigger threshold.

Still in the same study, mice were given pentylenetetrazol to provoke an epileptic state. Then they were given a placebo, Diazepam, or Passiflora incarnata (150, 300, or 600 mg/kg). The mice that were given Passiflora incarnata had higher serotonine and noradrenaline levels than the controls, and these effects were dose-dependent. (Likewise dose-dependent) lessening of the severity of the convulsive fits and shortening of the period of immobilisation were also ascertained. Although Diazepam acts more quickly to reduce the severity of the seizures, it worsens the subject’s depressive state and increases the period of immobility (SINGH & al, 2012).

Chronic insomnia has been proven to cause changes in the brain that lead to memory loss due to the production of reactive oxygen species (ROS) and inflammation. If that persists, insomnia can lead to Alzheimer’s disease. Vitexin is one of the active substances in Passiflora incarnata and plays a major role in improving sleep quality. Tests have been carried out on repeated administration of Passiflora incarnata to improve memory by boosting neurogenesis in the hippocampus of mice. The treated group showed an increased level of the neurotrophic factor BDNF in the hippocampus compared with the untreated group.

What is more, quantitative analysis of the protein Tau (a marker of Alzheimer’s disease) showed a significant drop in its concentration in the Passiflora incarnata group.

So, Passiflora incarnata helps to improve memory and learning and to prevent Alzheimer’s disease (KIM & al, 2019).

Vitexin depresses the migration of eosinophiles, neutrophiles, and monocytes in the bronchoalveolar fluid. Histologically, vitexin reduces leucocyte infiltration, mucus production, and pulmonary oedema. A decrease in the plasma IgE level is also seen.