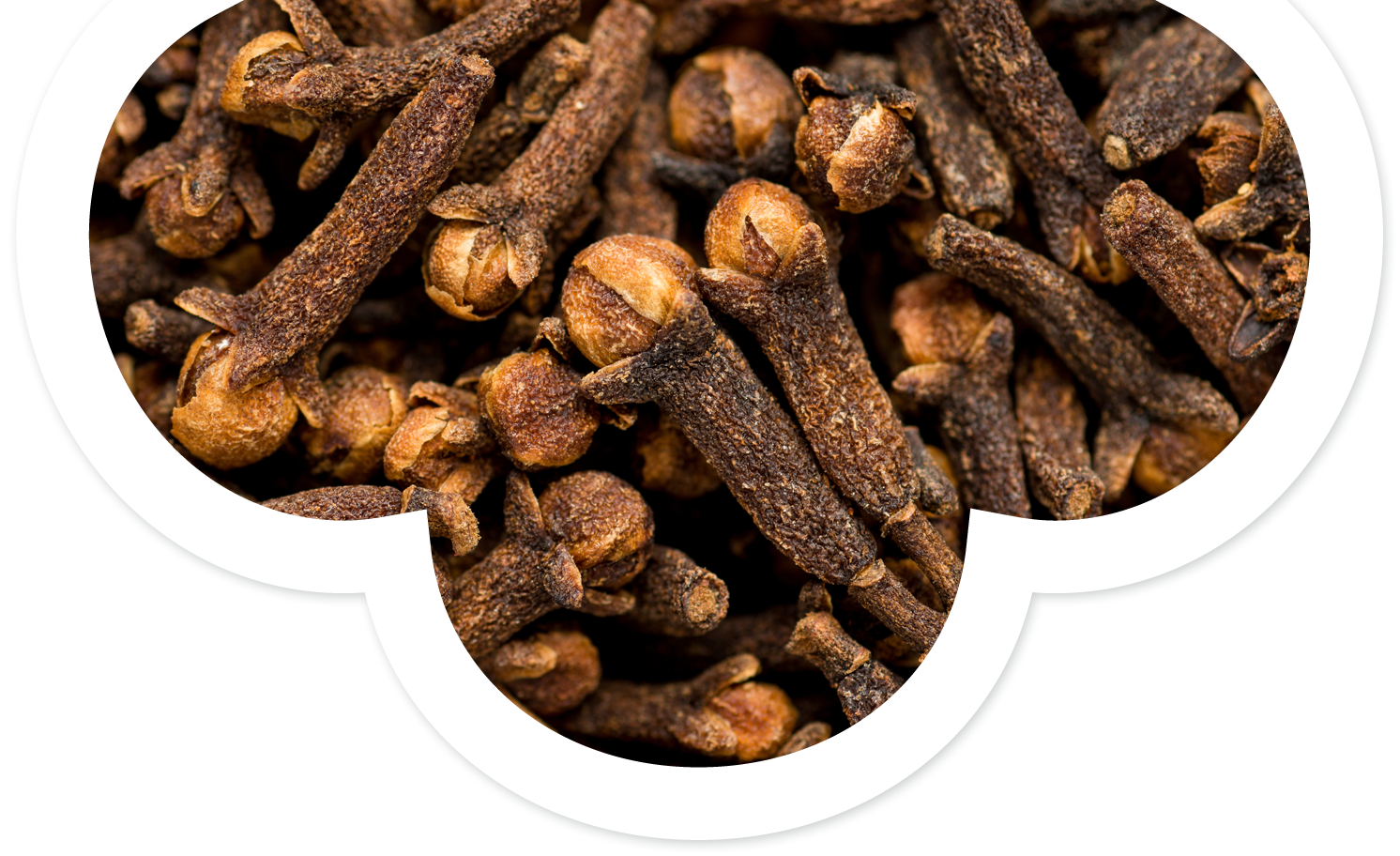 The Clove or Clove Syzygium aromaticum is part of the Myrtaceae family. They are native to Indonesia and can reach 20 meters in height under natural conditions. Their flowers are tubular, pink in color and button-shaped. They open on a feather duster of white stamens. Flower buds are harvested before they hatch to produce cloves.

Clove essential oil has been used to relieve dental pain, freshen breath and cleanse wounds for thousands of years. Its main components are eugenol (75-88%), acetyl eugenol (4-15%) and beta-caryophyllene (5-14%). It also contains minor constituents such as alpha-humulene, eugenyl acetate and sesquiterpenes (Monographie ESCOP, 2019).

Clove essential oil has many beneficial properties for the body.

It shows marked antioxidant activity in various in vitro tests: it has a scavenging activity against 2,2-diphenyl-1-picryl hydracyl (DPPH) radical, an inhibitory effect against hydroxyl radicals, an iron chelation effect and an inhibitory effect of lipid peroxidation (JIROVETZ & al., 2006).

In addition, it inhibits the formation of malonaldehyde in equine plasma by 48% (LEE & SHIBAMOTO, 2001).

Furthermore, eugenol exhibits an antioxidant effect in vivo and allows to reduce the hepatotoxic effects of carbon tetrachloride poisoning in rats (KUMARAVELU & al., 1995).

Eugenol has an inhibitory effect on the synthesis of the pro-inflammatory enzyme cyclooxygenase-2 (COX-2) (HUSS & al., 2002). Another study has shown that it does not inhibit COX-1 gene expression (S. S. KIM & al., 2003). In addition, eugenol inhibits the activation of the enzyme 5-lipoxygenase, which is the key enzyme in the leukotriene biosynthetic pathway. Leukotrienes are inflammatory mediators involved in the pathophysiology of allergic and inflammatory disorders. It also inhibits the formation of C4 leukotrienes in human polymorphonuclear neutrophils, which are cells that play an important role in the modulation of inflammation (RAGHAVENRA & al., 2006).

In addition, the beta-caryophyllene contained in clove essential oil has a local anesthetic effect. It dramatically and dose-dependently reduces contractions elicited electrically in vitro in a rat phrenic nerve preparation. In rabbits, treatment with beta-caryophyllene dose-dependently increases the number of stimuli needed to induce the conjunctival reflex (GHELARDINI & al., 2001).

Clove essential oil exhibits potent antibacterial activity on many species. Its effectiveness has been highlighted against both gram positive and gram negative bacteria. In particular, it has an inhibitory effect on the bacteriae Pseudomonas aeruginosa, Pseudomonas putida and Staphylococcus aureus (KAVANAUGH & RIBBECK, 2012). In addition, eugenol exhibits antimicrobial efficacy in vitro on various strains of Listeria monocytogenes and Escherichia coli O157:H7 (GAYSINSKY & al., 2005 ; PÉREZ-CONESA & al., 2006).

It also exhibits antiviral activity. In particular, it inhibits the replication of herpes simplex viruses type 1 and 2 (TRAGOOLPUA & JATISATIENR, 2007), and destroys their lipid envelope and that of the Newcastle disease virus (SIDDIQUI & al., 1996).

The aqueous clove extract exhibits anti-allergic effects by inhibiting the release of histamine from mast cells in vivo and in vitro in hypersensitivity models (H. M. KIM & al., 1998).