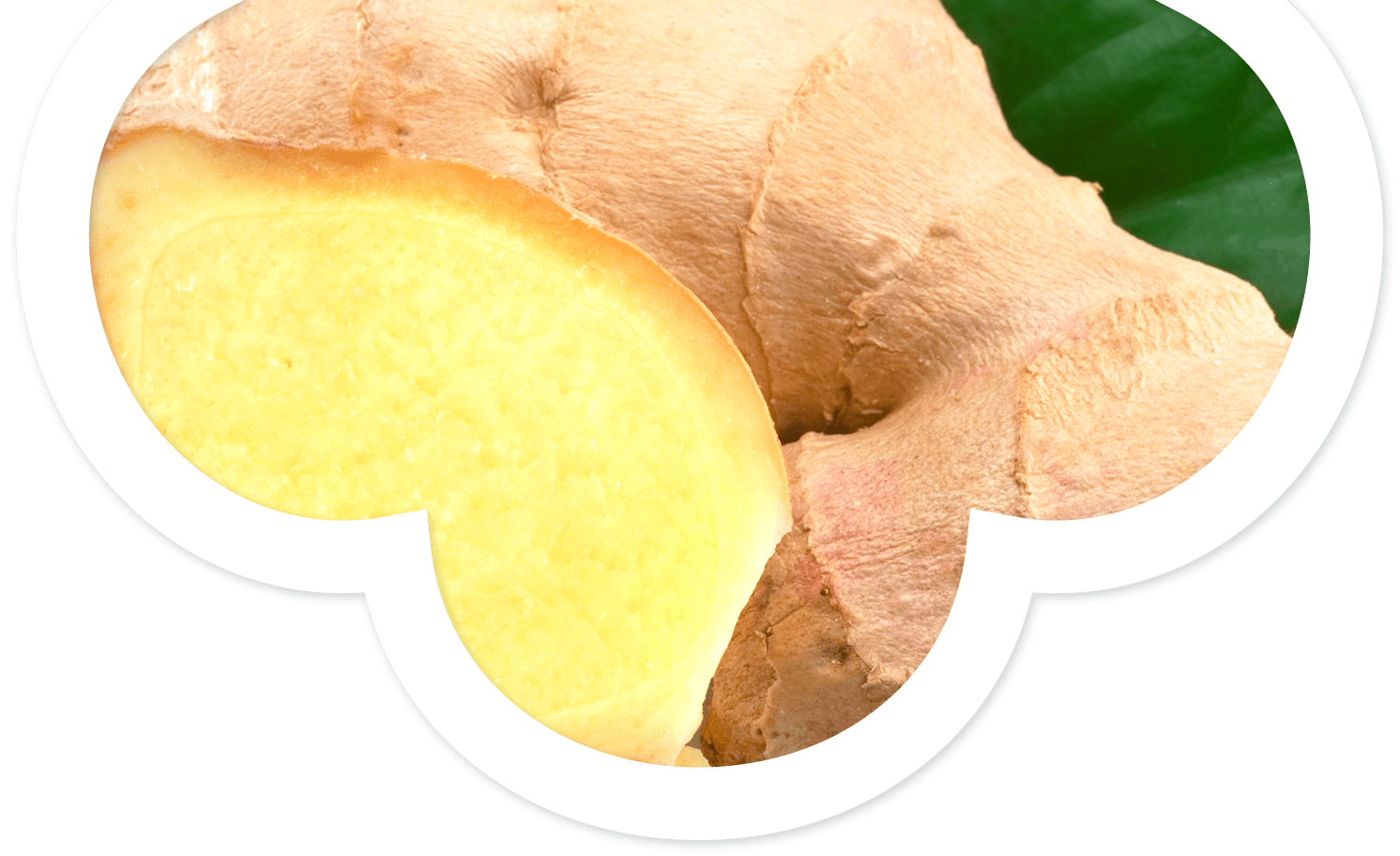 It is a native plant of India. Ginger is part of the Zingiberaceae family (like Curcuma longa). It has been used for thousands of years around the world, both as a condiment and for its medicinal virtues. It is mainly used to treat digestive disorders.

Europe approves its use in the prevention of vomiting (antiemetic) and to treat dyspepsia.

We use rhizome which contains a combination of essential oil and resin called: oleoresin. This resin is composed of sesquiterpenes (zingiberene, ar-curcumene, linalool, Citral, camphene…) phenols such as gingerol and its derivatives (Shogaol, zingerone, paradol).

It increases the synthesis of catalase and superoxide dismutase (SOD) (JEYAKUMAR & al, 1999). It protects the liver and kidneys from lipoperoxidations (AHMED & al, 2008 ; ASNANI & VERMA, 2007).

Gingerol seems to be the most interesting molecule in this function. It plays a protective role against colon cancer according to LIN & al, 2012. It is capable of inducing carcinogenic cell apoptosis by activating caspases in humans with colorectal cancer (ELKADY & al, 2014) but also in mouse melanoma (DANCIU & al, 2015).

Several studies show the value of using ginger in cases of myeloid leukaemia, in vitro as in vivo. The observed effects increase with time and concentration. Induction of a decrease in the spread of tumour cells in peripheral blood is observed through antimetastatic action. Gingerol has an antioxidant, anti-inflammatory, antiproliferative role. It can be used in combination with conventional chemotherapy (RASTAGONI & al, 2014).

Many studies examine the anti-nausea and antiemetic properties of ginger. Nausea and vomiting can occur as a result of primary digestive disorders, transportation sickness, medication or chemotherapy, as a result of surgical acts, or during pregnancy.

In dogs, ginger prevents cisplatin-induced vomiting (a molecule used in chemotherapy) but is ineffective against the effects of Apomorphine (SHARMA & al, 1997).

Against transportation sickness LIEN & al in 2003 showed that 1 to 2 gm is effective in reducing the frequency of nausea, reducing recovery time and extending the time before nausea. For post-surgical nausea, APARIMAN & al in 2005 showed that 500 mg given one hour before surgery is preventive 6 hours after surgery. A study by GULHAS & al in 2013 of 303 subjects found that inhalation of ginger essential oil significantly reduces the severity of nausea and the need for antiemetics after an intervention.

Ginger’s propensity as a hepato- protective is comparable to that of Sylimarine (present in milk thistle) by an antioxidant action according to BHANDARI & al en 2003.

In rats with acute liver symptoms caused by paracetamol, there is a decrease in ALT and PAL, as well as restoration of oxidative status after administration of ginger ethanolic extract (AJITH & al, 2007).

Also in animals, MOTAWI & al in 2011 demonstrated that ethanolic extracts increase glutathione synthesis as well as SOD, decrease AST, ALT, GGT, bilirubin, and reduce fibrosis and necrosis. It is even considered as cholagogic in Europe.

Finally, ginger stimulates the secretion of saliva, bile and gastric juices. It improves dyspepsia disorders. It stimulates appetite, reduces flatulence and colic. It is also antiulcerous. It is hypolipidemic. It decreases LDL and increases HDL in subjects who received 3 gm of ginger per day for 45 days

I hope I didn’t give you nausea, but the urge to use this spice, so enjoy your meal!!